After the cancellation in 2020 due to the pandemic, the 35th edition of the Inter-national ADAC Truck Grand Prix 2021 will definitely take place and will be held as a hybrid event - with thrilling motorsport and digital offerings. "For the season highlight of the European Truck Racing Championship, we are currently creating a concept that combines the best of both worlds - physical and digital....

After the cancellation in 2020 due to the pandemic, the 35th edition of the Inter-national ADAC Truck Grand Prix 2021 will definitely take place and will be held as a hybrid event - with thrilling motorsport and digital offerings. "For the season highlight of the European Truck Racing Championship, we are currently creating a concept that combines the best of both worlds - physical and digital. We want to offer the motorsport fans on site and at home an attractive platform. We are working flat out to achieve this," says Axel Friedhoff, Director of Sport at ADAC Mittelrhein e.V. The sporting part of the International ADAC Truck Grand Prix will focus on the rounds of the FIA European Championship from 16 to 18 July. 20 race trucks with 1,500 hp and prominent drivers like Jochen Hahn, Norbert Kiss and Sascha Lenz will compete for the weekend victory and thus for important points in the EM ranking. This will be the second time that the IDM Superbike 1000 stops at the Nürburgring. Against the background of the dynamic pandemic development with accompanying contact restrictions, the organisers unfortunately had to cancel the Country Festival, the trucker camps and open paddock as well as the trade fair this year. Subject to official approval, a limited number of spectators can be admitted. In order to make the visitor experience at the Nürburgring as safe and successful as possible, the organisers have developed a series of measures in the form of a non-contact spectator concept in close coordination with the Nürburgring, in accordance with the requirements of the Corona Protection Ordinance of the State of Rhineland-Palatinate, to ensure a safe live experience on site. To this end, ADAC Mittelrhein e.V. is in contact with the responsible district administration of Ahrweiler. Significantly lower ticket prices for 2021The tickets for the International ADAC Truck Grand Prix 2021 will be offered at considerably cheaper conditions due to the cutback of the supporting programme caused by the pandemic. The ticket prices have been reduced by about 50 per cent and vary between 20 and 65 Euros. Advance sales will start on 1 May 2021 at www.eventimsports.de/ols/truck-gp/. Motorsport fans who have already purchased tickets for this year can redeem them at the 2022 International ADAC Truck Grand Prix, which will take place at the Nürburgring from 15 to 17 July 2022. As a general rule, tickets purchased through the official ADAC Truck Grand Prix shop can be returned at any time. All that is required is an e-mail to kundenservice-truck-gp(at)eventim.de. Customers who did not purchase their tickets in the official ADAC Truck Grand Prix shop or via our hotline should contact the respective operator directly. "We would be very pleased if the ticket buyers would remain loyal to us for our Truck Grand Prix in 2022. We will provide information about the next concrete steps regarding this year's event promptly at a digital press conference," looks ahead to organisation manager Marc Hennerici. 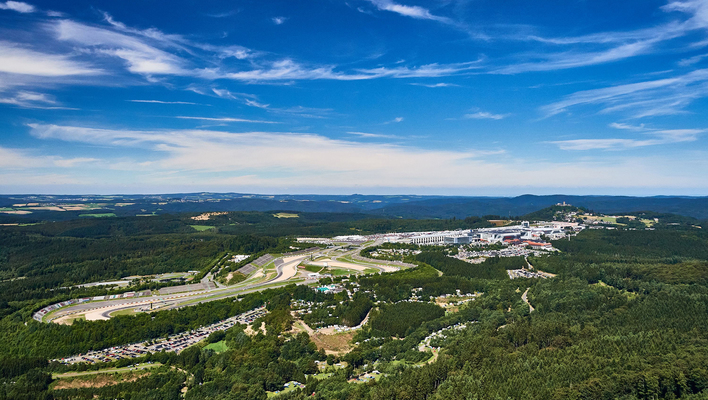 Following the announcement that the ban on major events will be extended until 31 October, the Nürburgring sees positive trends for the staging of events - also with an audience - in the further course of the year. The background to this is that, following the Chancellor's meeting with the Minister Presidents, the ban on major events until the end of October 2020 will only apply if contact tracking and compliance with hygiene regulations are not possible. But this is exactly what would be feasible at the race track. That is why those responsible are looking positively into the future.   "The Nürburgring is a structured event location and after all the longest permanent race track in the world with plenty of space for distance and a suitable infrastructure for hygiene measures," says Nürburgring Managing Director Mirco Markfort. "Regulated access to the grounds, fixed seating on spacious grandstands and numerous sanitary facilities as well as hygiene points are decisive things which, in our opinion, make it possible to comply with various guidelines".    The Nürburgring has been able to gain good experience in the implementation of offers using specially developed health concepts since the beginning of the Corona pandemic. Analogous to the step-by-step relaxation, the "contactless tourist drives" started as early as April and shortly afterwards other driving offers such as formula courses, sports driver training or "free driving" followed. On 27 June the Nürburgring Endurance Series will now enter its first race in 2020, under its own hygiene concept and for the time being as a ghost race without spectators. The next days and weeks will show what will be possible According to the latest announcement from the conference of the Chancellor and the ministers, those responsible now see the decisive differentiation in terms of the conditions for banning events as the next good step. On this basis, the Nürburgring continues to adhere to its calendar and hopes to be able to organise events with spectators again in the future, after ghost races.    "Even though these are extremely difficult times, we are currently very happy that the Endurance Series can start again and look forward to the rest of the year in which, for example, the AvD Oldtimer Grand Prix, the ADAC GT Masters, the ADAC TOTAL 24-hour race, the DTM or a World RX of Germany will be held," says Markfort and also points to the fact that the special atmosphere of the Nürburgring events is decisively created with and by the fans. "That's why we are working hard to ensure that there can be spectators again. The concepts are constantly refined and adapted to the requirements. The next days and weeks will show what will be possible and to what extent. The course of the pandemic is, of course, also decisive for this, in addition to the dialogue with all those involved."      Photo: Robert Kah / Nürburgring 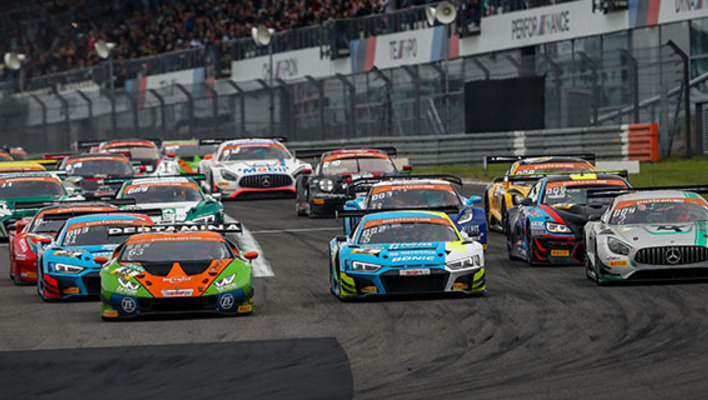 Bortolotti and Engelhart with second win of season at Nürburgring

Pole-sitters Mirko Bortolotti (29, ITA) and Christian Engelhart (32, GER, both Orange1 by GRT Grasser) cruised to a second win of the season in Saturday's ADAC GT Masters race at the Nürburgring. Luca Stolz (24, GER) and Maro Engel (33, MON, both Toksport WRT) finished second in a Mercedes-AMG GT3. Joining the podium party in P3 were current championship leaders Patric Niederhauser (27, CH) and Kelvin van der Linde (23, ZA, both HCB-Rutronik Racing) in the best of the Audi R8 LMS contingent. "In recent years, the Nürburgring has been a problematic track for us," said Engelhart. "But now, with the new car, it seems to suit us a lot better. After the win at Zandvoort, it's great to get another here."     Mirko Bortolotti and Christian Engelhart took a comfortable win, and it was only at the start that pole-sitter, Bortolotti, found himself briefly under pressure. The Lamborghini works driver then proceeded to pull away from the rest of the field. He had opened up a gap of just over three seconds by the time he came into the pits towards the middle of the race for the mandatory change of drivers. Partner Engelhart then extended their cushion to more than five seconds at times. It was not until the final few laps that the German half of the partnership was then able to ease off a little, eventually taking the chequered flag by a margin of 2.7 seconds. Bortolotti and Engelhart finished on the top rung of the podium for the second time in a week after their success in Saturday's race at Zandvoort.     Luca Stolz and Maro Engel in P2 also finished on the podium in the best-placed Mercedes-AMG. Championship leaders Patric Niederhauser and Kelvin van der Linde completed the party on the podium. Stolz and Engel had been fourth behind the Audi pairing initially, but on Lap 7, Stolz found a way past Niederhauser to take third place which he then maintained until the pit stop. After the driver handover, Engel and van der Linde battled their way past Carrie Schreiner (20, GER, HCB-Rutronik Racing) in second place. Her partner, Dennis Marschall (23, GER) had started from the front row. While Schreiner's Audi dropped back down the field to finish 14th, Engel and van der Linde secured their place on the podium. Stolz and Engel are not eligible to score points as guest entrants but secured Toksport WRT's maiden podium in the ADAC GT Masters. Niederhauser and van der Linde in P3 extended their lead in the standings with their fourth podium of the season.     Fourth place went to David Jahn (28, GER) and Sven Barth (38, GER, both RWT Racing) in the best-placed Corvette C7 GT3-R. Barth secured his fourth win of the season in the Pirelli Trophy classification. Max Hofer (20, AUT) and Christopher Mies (30, GER, both Montaplast by Land-Motorsport) came home behind them in another Audi to finish fifth overall. Hofer was the best driver in the Pirelli Junior classification. Indy Dontje (26, NL) and Maximilian Götz (33, GER, both Mann-Filter Team HTP) fought their way up the field in the Mercedes-AMG GT3 from 13th place on the grid to finish sixth.     Luca Ludwig (30, GER) and Sebastian Asch (33, GER, both HB Racing) in the Ferrari 488 GT3 took points for P7 from the Audi pairing of Ricardo Feller (19, CH) and Dries Vanthoor (21, BEL, both Montaplast by Land-Motorsport). In a scrap for ninth place that continued over several laps, defending champion, Robert Renauer (34, GER) and Thomas Preining (21, AUT, both Precote Herberth Motorsport) in the Porsche won through against Nicolai Sylvest (22, DK) and Jens Klingmann (29, CH, both MRS GT Racing) in the BMW M6 GT3.  Comments from the winners: Mirko Bortolotti (Orange1 by GRT Grasser, Lamborghini Huracán GT3 Evo): "It was a tight situation on the first corner, as we all had full fuel tanks and cold tyres and no-one really knew where to brake. But I have to compliment the whole field on the way they went around it. I then tried to pull away and managed to open up a gap. We made the pit stop at the right time, which enabled us to increase our lead. So, all in all, a great performance and a perfect race for us."     Christian Engelhart (Orange1 by GRT Grasser, Lamborghini Huracán GT3 Evo): "When I took over the car, I knew that I had Maro Engel behind me. In those circumstances, you can't relax - you just have to keep pushing. And that's what I did until three laps before the finish when the team told me that I had a lead of 5.2 seconds. So I eased off slightly and avoided the kerbs in the chicane to go easy on the tyres."    Photo: Gruppe C