LOOKING FORWARD TO THE HIGHLIGHT: SCHEDULE FOR 24H RACE PUBLISHED

At the beginning of June, the highlight of the season awaits you in the Green Hell. From June 3 to 6, the ADAC TOTAL 24h Race will be hosted on the combination of the Grand Prix track and the Nordschleife. Just one month before, the perfect tuning was in place: The 24h Qualifying race on 8 and 9 May. The schedules for both race weekends have now been published. According to this, the... 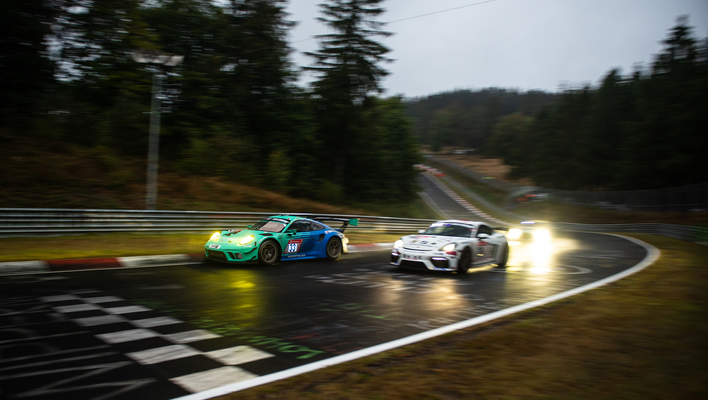 LOOKING FORWARD TO THE HIGHLIGHT: SCHEDULE FOR 24H RACE PUBLISHED

At the beginning of June, the highlight of the season awaits you in the Green Hell. From June 3 to 6, the ADAC TOTAL 24h Race will be hosted on the combination of the Grand Prix track and the Nordschleife. Just one month before, the perfect tuning was in place: The 24h Qualifying race on 8 and 9 May. The schedules for both race weekends have now been published. According to this, the 24h-Qualirace offers two action-packed days. The highlight is the six-hour race, which starts on Sunday (May 9) at 12:00 p.m.. In 2021, the 24h Race will continue to run for four days, with RCN races, touring car legends (two races), ADAC 24h Classic and of course the spectacular FIA Touring Car World Cup (WTCR – 2 races). It is not yet clear which teams and riders will be at the start. The namings are not yet finalised. Just as inconceivable as the question of who will be on the starter list at the end is the question of whether there will be spectators at the Nürburgring. At the moment, motorsport is possible for the active participants in compliance with a strict infection and hygiene concept, but fans are still not allowed to be there. Of course, the organising ADAC Nordrhein and the Nürburgring are closely monitoring the pandemic situation in order to be able to react immediately in the event of any changes. So that the fans can follow the races from anywhere, there is again an extensive streaming offer, live timing and the ticker. 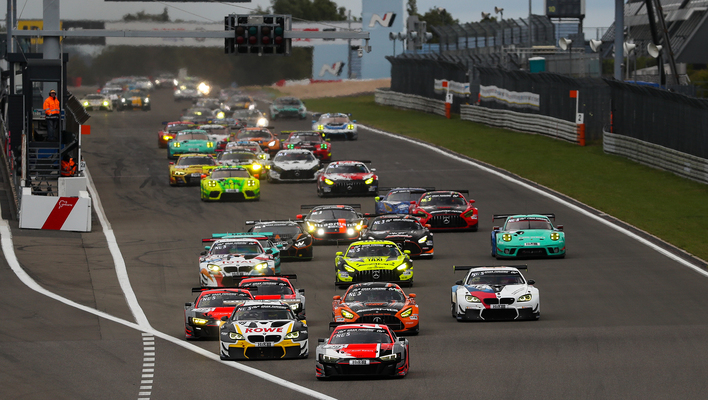 After snowfall made the season opener of the Nürburgring endurance series impossible three weeks ago, the forecasts for the NIMEX 45th DMV 4h Race are positive – not only in terms of weather – for everyone involved. Now things are finally going well, drivers and teams of 147 vehicles are looking forward to their first ride through the Green Hell. Most cars are in the GT3 class SP9. 20 cars from Audi, BMW, Ferrari, Lamborghini, Mercedes-AMG and Porsche Fighting for the day’s victory. New at the start compared to the opening race Michele Beretta and Nicki Thiim driving a second Audi R8 LMS for Phoenix Racing. Also deployed in 2021 by the team from Meuspath: The Weekly Mirror Ferrari. Georg Weiss, Daniel Keilwitz and Jochen Krumbach celebrate under the application ‚ WTM powered by Phoenix “ their comeback in the unique Nordschleife championship. New in the GT3 class of the NLS is CP Racing, the team around the US-American Charles Putman and Joe Foster. In the absence of his traditional HRT team, Nordschleife specialist Adam Christodoulou will be making a guest start for the debutants. Fast ladies enrich the field of participants in the Nürburgring endurance racing series, especially the Team GITI Tire Motorsport by WS Racing. Carrie Schreiner and Célia Martin will compete in the Audi R8 LMS GT4 under the motto “Girls Only. ” A pure women’s crew also brings the team AVIA Sorg Rennsport to the start. Here Pippa Mann, a driver with an Indycar background, and Christina Nielsen in class VT2 take the wheel of the BMW 330i. For Four Motors, Simona De Silvestro drives a Porsche Cayman GT4 in the alternative fuel class. In the Hyundai i30N by ROJA Motorsport by ASL Light Blue is Jessica Sofia Elisabet Bäckman Fabienne Wohlwend starts for the Adrenalin Motorsport Team Alzner Automotive in the VT2. Sophia Gachot is in the V5 for rent2drive-FAMILIA-racing in a near-series Porsche Cayman. A duel between two teams with female participation takes place in the SP3T. Michelle Halder competes with her Seat Cupra against Jasmin Preisig in Max Kruse Racing’s VW Golf GTi TCR. Katharina Lippka dares to rise from the RCN performance test to real racing at the NLS. The bank clerk from Neuss will start with a BMW 325i in class SP4. The only woman in SP9 is Janine Shoffner. She shares the cockpit of the Mercedes-AMG GT3 from GetSpeed Performance with Moritz Kranz and aims to win the class in the Am classification of the premier class. Matthias Malmedie celebrates his comeback in the Green Hell. The presenter, who lives in Cologne, was already on the Nordschleife in the early years of the millennium. Since 2007 he has been moderating the format “ GRIP - The Motormagazin” at RTL II, which he played a significant role in developing. He will tackle the race together with Markus Flasch and Jörg Weidinger in the BMW M2 CS Racing of the Adrenalin Motorsport Team Alzner Automotive. Strongly occupied Cup classes 19 vehicles can be found in the provisional list of participants in the Cup3. Constant drops are hitting the rock – in the sixth year of the Cayman GT4 Trophy by Manthey-Racing and in keeping with the 25th anniversary of the racing team from Meuspath, the class is celebrating a record-breaking field for starters. The two production car classes VT2 (18 cars) and V4 (16 cars) are also well-attended. With twelve M2 CS Racing, the BMW Cup of the same name is well-attended in its debut year. Seven cars in the CupX, the KTM X-Bow Cup powered by Michelin, are also impressive. Hygiene concept further refinedAlso race two of the Nürburgring endurance series takes place under special conditions due to pandemic conditions. Spectators at the race track are not allowed, the paddock is only accessible to a limited number of people per team. All team members entering the paddock must have a negative Corona test. Masks are generally required on the entire event grounds and people are required to observe distance and hygiene rules. The course of the event was organised in advance in such a way as to minimise contacts. For the NIMEX 45th DMV 4h Race, the procedure for submitting Corona test results and issuing tickets to drivers and team members is completely digitized and implemented without contact. The NIMEX 45th DMV 4h-Race will start punctually at 12 noon on Saturday over the distance of four hours. Prior to this, the positions on the starting grid will be determined in qualifying from 08:30 to 10:00. The livestream on VLN.de, YouTube and Facebook will show the race action from the Green Hell from 08:30 - by the way, in 2021 at all races with spectacular live images from the ROWE-Heli. © NLS 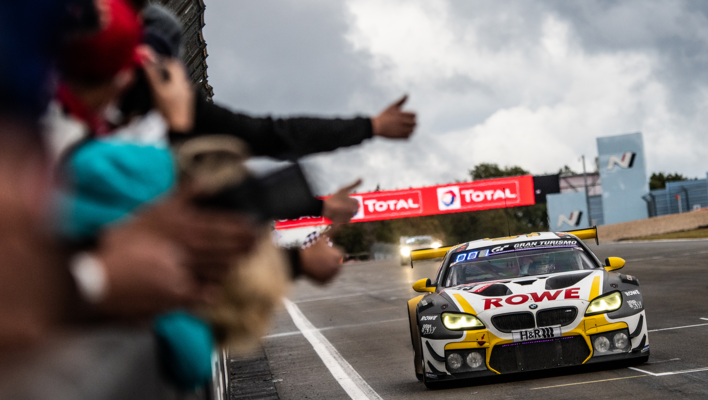 The highlight of the Nürburgring season, the ADAC TOTAL 24h Race, can take place as planned. This is made possible by a show of strength by a number of partners. At the organising ADAC Nordrhein, the lights are now set on "green" for the hot phase of preparations for the race from 3 to 6 June. The ADAC 24h qualifying race on 8 and 9 May is also scheduled to take place as planned. A fundamental contribution is being made by Nürburgring 1927 GmbH &amp; Co KG, which once again underlines the excellent cooperation with ADAC Nordrhein as the organiser. But also the premium car manufacturers Audi, BMW, Mercedes-AMG and Porsche as well as the tyre manufacturers Falken, Goodyear and Michelin are contributing considerable sums to secure the race. On the marketing partner side, Sporttotal as the holder of the 24h rights and Eurosport Events as the promoter of the FIA WTCR have made important contributions. And Scuderia Cameron Glickenhaus also contributes to the sponsorship pot, demonstrating its deep commitment to the event, at which the "Glickenhaus Award" is also presented annually as a challenge cup for the fastest Nordschleife driver of the season. This year, the planning for the ADAC TOTAL 24h Race is again facing many hurdles. "Of course, we had hoped that we would be able to overcome Corona by June 2021 and that we would be able to stage the 24h race in its former glory, so to speak," summarises race director Walter Hornung, noting: "Now things are turning out quite differently, and the race will be an even bigger tour de force for us than last year." Because in view of the pandemic situation, it is currently not foreseeable whether and if so, to what extent spectators can be admitted. Hornung: "Of course, this hurts us in several ways. On the one hand, we are clearly lacking income as an important component of the budget. But on the other hand, our fans of course contribute to the inimitable atmosphere at the 24h race - and we sorely missed that last year." Nevertheless, those responsible at the ADAC Nordrhein see that the event is important for very many people - in some cases even existential. "Jobs at many teams, suppliers and also at the circuit itself depend on the 24h race," says Hornung. "That's why we really pulled out all the stops to secure the staging." It became clear early on that a postponement of the 24-hour race was not the most obvious alternative. After all, August and September are already packed with dates in the 2021 season. Collisions with other events and series would have been unavoidable. So in the end, thanks to the strong partners, it was possible to secure the staging of the race on the original date in June. "On behalf of the ADAC Nordrhein, we would like to thank them very much for this," said the race director. "And now we are very much looking forward to offering the best possible 24h race that is possible under the conditions." Tickets will be taken back for a refundOne of the biggest factors of uncertainty now is whether and to what extent spectators can be admitted to the 24h race. In the current situation, an event without any fans at all could be imminent. "But of course we will do what we can," promises race director Walter Hornung. Last year, it was already possible - at the last minute, so to speak - to open the grandstands to a limited number of fans. Because it is still not foreseeable whether the usual scope of attractions and services will be possible this year, the organisers have now decided to take back all tickets already purchased from last year. Hornung: "Advance sales for 2021 were deliberately not started. In the coming days, we will additionally create the possibility to take back tickets already purchased in the previous year for a refund of the ticket price." More information on this will be available shortly at www.24h-rennen.de on the official homepage. To make sure you don't miss the action every minute of the race, extensive live coverage is also planned for 2021, bringing the race directly to fans' living rooms via free-TV, livestream and digital services. Wave of solidarity with the 24h raceAfter interim media reports about a possible cancellation, the organisers of the ADAC TOTAL 24h race were overwhelmed by a wave of solidarity. Among other things, sports officials offered to compete without compensation and fans wanted to set up crowdfunding projects. "We are overwhelmed by these signals," says race director Walter Hornung happily. "It shows us that this event is close to the hearts of many, many people. For us organisers, this is a great incentive." Now hopes are also resting on the fact that the pandemic can finally be overcome in the course of the summer. "Because in 2022 we want to celebrate the 50th 24h race as a big reunion party - of course with the fans and with the special atmosphere that makes this weekend the most beautiful and biggest motorsport festival in Germany," says Hornung.