Nürburg. The new management at the Nürburgring officially starts their work on January 1st. Nevertheless, Ingo Böder and Christian Stephani have already made an important decision: The prices for tourist trips remain stable - despite inflation and despite increased costs. At the same time, the race track is publishing the dates for the 2022 tourist drives on the Grand-Prix track and the... 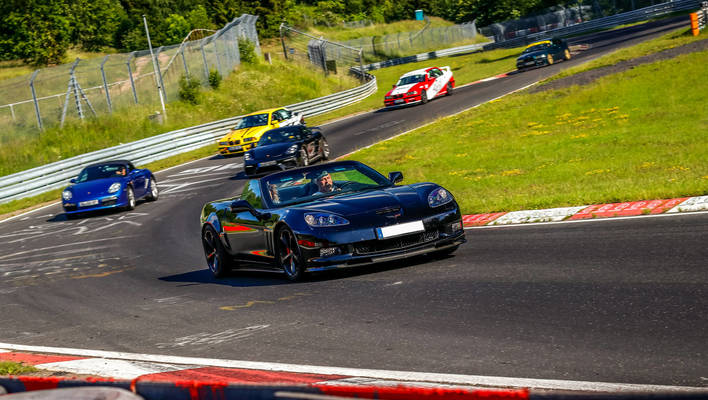 Nürburg. The new management at the Nürburgring officially starts their work on January 1st. Nevertheless, Ingo Böder and Christian Stephani have already made an important decision: The prices for tourist trips remain stable - despite inflation and despite increased costs. At the same time, the race track is publishing the dates for the 2022 tourist drives on the Grand-Prix track and the legendary Nordschleife. This also includes the highlight weekends such as the “Green Hell Driving Days” and the Easter weekend, which offer several days of driving fun at a time. For frequent drivers there is still the offer of the season card, which is available from January 11th. "In these times, when so many things are getting more expensive, we want to give the fans of our racetrack a piece of consistency," says the future management of the Nürburgring operating company. The decision in favor of stable prices is therefore also a sign of solidarity in difficult times. In addition to occasional drivers from all over the world, a large community of fans has formed who regularly drive their own vehicles on the track. The rules for driving as part of the tourist drives are very simple: In principle, anyone who has a driver's license and a registered, roadworthy car or motorcycle can drive on the Grand-Prix track or the Nordschleife. The rules of the road traffic regulations apply. This means that, for example, the right-hand drive applies and overtaking is therefore only permitted on the left. A stopwatch is also not allowed to run while driving. These rules define the tourist trips as a ride for everyone and clearly separate them from racing events.  Tourist trips almost daily - first date on March 12th The Nürburgring 1927 GmbH & Co. KG has now published the dates for everyone who wants to take the historic race track under their own wheels. The official start of the tourist driver season will be given on Saturday, March 12th. From March 21st, things really get going: the racetrack opens its barriers to private drivers almost every day. The Green Hell Driving Days and the Easter weekend promise to be real highlights again. From April 15 to 18, from June 16 to 19 and from October 1 to 3, the Nürburgring can be used for several days from morning to evening. A round of the Nordschleife starts at 25 euros In addition to the dates in 2022, our website offers the option of  topping up credit for tourist trips. With a customer account, everyone can keep an eye on their personal data. Since the lap prices remain stable in the sixth year, a lap on the Nordschleife still costs 25 euros from Monday to Thursday and 30 euros from Friday to Sunday and on public holidays. On the Grand-Prix track, regardless of the day of the week, the 15-minute stint is also available for 30 euros. Anyone looking for unlimited driving pleasure is well advised with the season card. It is available for 2,200 euros and entitles you to drive on the Nordschleife and the Grand-Prix track. Until it starts again, the fans have to be patient a little longer. The asphalt on the wintry Nürburgring is currently being renewed. The work will be completed in time for the start of the season and then, as usual, offer all drivers the best conditions. 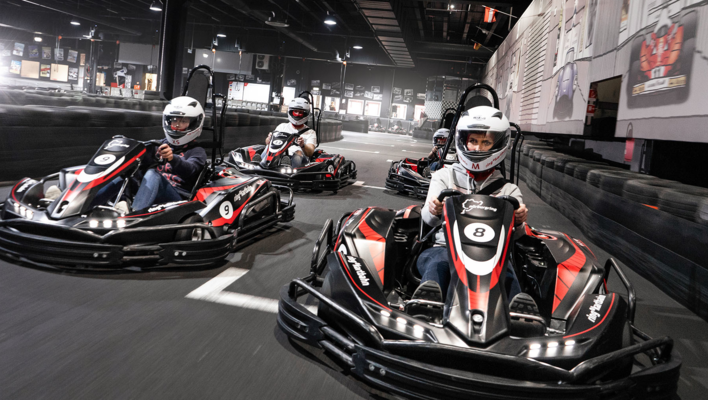 Ring free for the summer holidays! Unique family experiences at the Nürburgring

Different offers for day trips or vacations Action on the kart track, nature experience with the eBike # RingSummer Contest: Experience Package worth more than 1,000 Euros Nürburg. For families looking for a varied excursion destination during the summer holidays, the Nürburgring is the right choice. Numerous adventure offers and attractive overnight accommodation offer the perfect conditions for entertaining day trips or a real relaxing holiday. Rapid rounds on the kart track are just as possible as a relaxed trip into the Eifel countryside – on foot or by eBike. During the summer holidays, a visit to the Nürburgring is worth twice as much. A competition with a high-quality experience package as a prize awaits visitors young and old. All information, opening times and offers can be found on the website of the race track at: nuerburgring.de The Nürburgring and the legend of “Green Hell” are known all over the world, yet for many this unique place is located right at the doorstep. During the summer holidays in North Rhine-Westphalia and Rhineland-Palatinate, the racetrack offers a lot of opportunities for families. The motorsport adventure museum “ring°werk” offers an exciting journey through the history of the Nürburgring. Visitors can expect breathtaking racing cars and legendary racing drivers, but equally action-packed hands-on offers. Those who want to take a look behind the scenes of the racetrack can take part in the backstage tour at selected dates – including visits to the winners’ podium or in the pit lane and lots of interesting facts about the Nürburgring. For a short detour and a view of the start-finish straight and the pit lane, the trial stand will also open to visitors. Virtual race, real tourist ride or best time on the kart trackAnyone who wants to take the wheel and chase the best times can do so at the ring°kartbahn. Modern electric karts and a varied track layout ensure a fast and safe driving pleasure. Right next door there is the driving pleasure on the racetrack with your own vehicle during the tourist drives. For big and small racing drivers who would like to push a racing car to the limit, the Nürburgring eSports Lounge in the ring°carré offers a great opportunity. High-quality simulators make the virtual ride experience feel real. Visitors can choose between different racetracks and vehicles. And if you need a refreshment after exciting races, you will find here the Bitburger Gasthaus and from August the new restaurant “LUCIA – Pollo Italiano” – a versatile offer of food and drinks right next door. When the weather is good the outdoor gastronomy is the best choice. Accommodation offers directly at the RingHowever, the Nürburgring is more than just a destination for the perfect day trip. In the region all around the legendary track there are numerous opportunities for active holidays in nature. Hiking trails – also around the Nordschleife – offer as much a distance from stressful everyday life as an excursion by bicycle. In future, there will be the opportunity to rent an eBike at the Nürburgring to explore the region around the Green Hell yourself. Since visitors cannot take advantage of all the offers during only one day, it is worthwhile to make use of the overnight accommodation options in the immediate vicinity of the racetrack. The Nürburgring holiday park managed by Lindner offers the perfect holiday conditions for families and groups with cozy cottages of various sizes. From here, every holiday starts well rested into the day. If you want to take a souvenir of the beautiful time, you will find many different fan articles in the Paddock shop right next to the ring°boulevard. Your #RingSommer - Competition for all visitors to the NürburgringThis year’s summer holidays at the Nürburgring are more than just a local experience. They will also be accompanied by a special contest on social media. Anyone who shares their personal ring experience on their social media channel under the hashtag #RingSommer has the chance to win a great experience package worth more than 1,000 euros. The Nürburgring will draw this prize among all participants. Included are three overnight stays in the Nürburgring holiday park for up to five people, a co-pilot ride in the Mercedes-AMG GT R, a 10-ticket for the ring°kartbahn, a visit to the motorsport adventure museum “ring°werk”, a Nürburgring eBike for one day, a voucher worth 50 euros for the gastronomy in the ring°carré, a voucher worth 100 euros for the Nürburgring paddock shop and a voucher for a virtual experience in the Nürburgring eSports Lounge. Go to #RingSommer competition 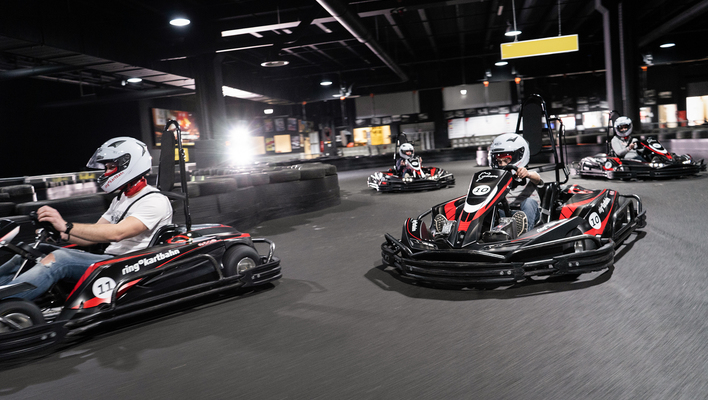 The Corona-related break at the ring°kartbahn is over. From Saturday, 22 May, karting fans young and old can go full throttle again. They can look forward to a freshly wrapped kart fleet. Fire red on matt black - interspersed with white design elements: The new design of the Nürburgring karts is elegant and racy at the same time. And is thus perfectly comparable to a lap on the almost 400-metre-long indoor track. A motorsport spectacle for everyone: from the age of 12 you can take a seat in the modern electric vehicles. Special children's karts are available for younger drivers (8 - 12 years). The 10-minute stint starts at 11 euros. Currently, karting enthusiasts need an appointment in advance, which can be obtained by phone +49 (0) 02691 302 6670. In addition, a negative Corona rapid test must be available. more information & open hours